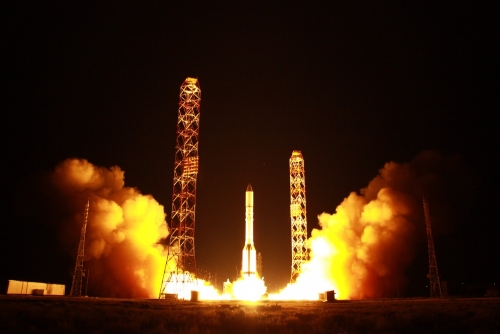 On July 31, 2020, two spacecrafts, Express-80 and Express-103, ordered by the Russian Satellite Communications Company (RSCC), were launched from the Baikonur cosmodrome. The new satellites were put into the target geo-transfer orbit and later will be placed in the geostationary orbit at 80° and 96.5° E.

The spacecrafts are intended to provide fixed and mobile services; digital TV and radio broadcasting; high-speed Internet access, as well as data transmission across the Russian Federation and abroad. The full-scale functioning is scheduled to commence in January and February 2021.

“With two newly-launched satellites, Express-80 and Express-103, the throughput of our constellationis now up by a quarter,” said Yuri Prokhorov, RSCC acting Director General. “It is crucial for RSCC that these spacecrafts in orbital slots centered over the Russian Federation are already demanded by our customers. This will allow telecom operators to transfer their networks from foreign spacecraft and provide domestic subscribers with the most advanced digital communications and broadcasting services, including Internet access for maritime and aerial customers.”

The vehicles were manufactured by the Russia’s leading aerospace enterprise, JSC ISS Reshetnev, in collaboration with its European partner, Thales Alenia Space.